A few years ago, a good friend of mine had her first child. After the fact, she told us her labor and delivery story, which included her apologizing on behalf of the legal profession to the anesthesiologist (in between screams) for making her sign so many damn consent forms before she could have her epidural.

Any doctor will tell you that lawyers as a breed have done an excellent job of instilling the need for an abundance of ass-covering measures. As it turns out, they've done the same for daycares. 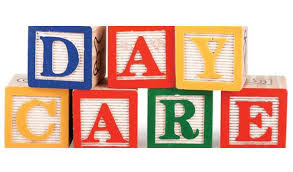 As someone who has filled out more than her fair share of daycare forms, allow me to explain.


If you think about it, it makes perfect sense that daycares would make parents jump through a hula competition's worth of hoops, ensuring that pretty much any and all liability is extinguished with the stroke of a pen. They are agreeing to be the caretakers of children who are still young enough to be hell-bent on self-destruction, fixated on wants, and liable to eat a peanut even if it's likely to kill them. With that in mind, there are some really important things that daycares want to know before your child arrives on that first day. To wit:

But then you get to the questions that are clearly designed to avoid the wrath of certain parents... parents who might threaten to sue over things like GMO foods and Coppertone sunscreen.

Case in point: on the latest daycare application, there was actually a sunscreen form (name of daycare obscured for privacy reasons). I actually had to sign a form acknowledging that the daycare was authorized to use a particular type of sunscreen on my kid. 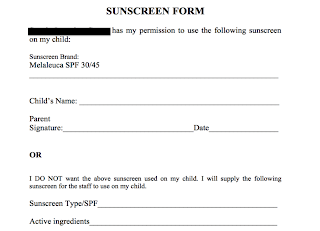 Now, what I'm about to tell you is probably going to get me labeled a horrible, careless parent, but in our house, we use Coppertone Baby. The spray on kind. (Cue horrified gasping and whispering). Don't get me wrong, I've tried other kinds of sunscreen, including Honest Company (which is now being sued over its inefficacy). I find that the zinc-based sunscreens are impossible to apply. They are thick. They are sticky. Even worse, they make my skin itch like crazy. While Avery hasn't seemed to have any adverse reaction to these the few times we've used them, getting thick, oily, gloopy sunscreen applied to a highly-mobile wiggle worm is next to impossible. I never know if I got her covered, or if she's going to end up with giant red patches where I missed as she was trying to escape from me.

The spray, on the other hand, works. She thinks it's fun when I spray it on her legs. She lets me rub it in. I know she's covered. Moreover, my mom used Coppertone on me and my sister when we were kids. Even though she's horrified by that thought now (hi, Mom!), my sister and I are just fine. Avery will be too.

Of course, the madness doesn't end at sunscreen.

I also had to fill out a form providing a granular level of specificity about the application of diaper cream:

Once again, I'm going to expose myself to shrieks of "bad mother," but honestly, I just don't put that much thought into diaper cream. Here's my entire thought process around it:

Does Avery look rash-y? Yes? Okay, diaper cream. Enough to cover the rash. Which one? Well, which one can I dig out of the drawer with one hand while I try to keep Avery from launching herself off the changing table.

She doesn't look rash-y? Okay, probably no diaper cream. Maybe just a little doodad of vaseline... if I can find it.

Once you get through all of the "what you can and cannot put on my child and in what time, place, circumstances, and order," we come to the portion of the application known colloquially as "pointless repetition of information." For example, I filled out no less than four different forms which required me to put down our home address, my mobile and office phone numbers, my email addresses (personal and work), and all the same information for Mark, including home address even though we live in the same house. Ditto all of that information on all of those forms for Grandma and Grandpa who are serving as our emergency contacts. "But Grandma and Grandpa live in the same house!" you say.  Why yes, but you still have to write down the address for each of them.

And then finally, we come to the field trip portion of the application...

Now, it makes perfect sense to me that the daycare would require a parent to sign a consent form prior to a field trip. Seems like standard field trip practice. I remember obsessing about this when I was a kid, dancing around the kitchen, waving the form for my mom to sign.

But for daycare, this CYA measure is just not quite CYA enough. No, for this daycare, you have to sign a form acknowledging that you will read and sign field trip permission slips before the daycare can permit your child to participate. Yes, I had to sign a form in order to... sign another form. It felt a little something like this:

Now, lest you think that all of this was simple an exercise in paperwork, let me enlighten you with respect to the essay portion of this application.

Yes, that's right. Like all good admission applications, we had to complete the daycare equivalent of the personal essay. In this case, "describe your child's personality traits and how they manifest themselves."

Here's the blow-by-blow of my reaction to this:

The day after I filled out all of these forms, we rolled up to our daycare tour, Avery dressed in her most charming outfit, forms and a cheque for a large sum of money in tow. Short of the daycare being reminiscent of an asylum, we were going to get our spot, come hell, high water, or paper blizzard. Frankly, the other daycares for which we're still on the waitlist will likely have a spot for Avery around the same time that we're filling out actual college admissions forms, so this was a critical moment for the future of our childcare plans. After a 15 minute tour, we turned in our forms and paid our money and Avery was formerly admitted to daycare...

.... pending the orientation we have to do next week. Because #DaycareIsCollegeForTots