Of all of the blog post topics floating around in my head at any given time, this is the one I've always known I'd have to write. It involves all the things I most enjoy blogging about: my own absurdity, the indignities of pregnancy and parenthood, the things you aren't supposed to talk about in polite company. The topic of today's post is Morning Sickness.


I've written in the past about all the half-truths and dirty lies that women are told before, during, and after pregnancy. The biggest of these, by far, is the myth of morning sickness.

You can picture it -- the classic movie scene in which some poor woman is heard (and occasionally seen) discretely retching in an upstairs bathroom (frequently kneeling on a towel), light streaming through the windows. Often, she's wearing a nightgown (so as to eliminate any doubt that it's morning wink wink nudge nudge). Occasionally, this scene plays out in a public restroom, where the viewer sees nothing but two little feet beneath the door of a bathroom stall... cough, cough, flush. Either way, audience is immediately cued in that said woman is (hushed tone) "with child." Pan to the presumptive father / BFF / horrified parent standing outside the door usually looking something like this: 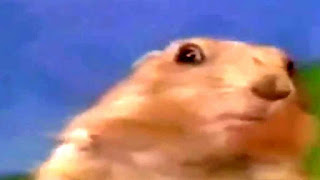 Of course, the woman always walks out of the stall/bathroom, and but for the realization that someone knows her secret (hush!) she looks pretty darn perfect. No make up running down her face, no splatters of toilet water and vomit speckling her shirt front, nothing on her breath that a discrete swish of water and a little cool mist on her cheeks can't handle....

BAHAHAHAHAHA. I had spare make-up in my bag at all times, and on a few occasions I had to make mid-day shopping runs to buy a clean shirt so that I didn't walk around the office stinking of vomit.

Movies, and life in general, also teach you that while morning sickness is a sign of pregnancy, it's a short-lived nuisance. For most women, "morning" sickness is confined to the first three months of pregnancy and the hours prior to noon. Heartburn may come later, but at least you won't be upchucking on top of it. Indeed during the first trimester, while I was throwing up in toilets and sinks and alleys and trash cans and air sickness bags and in my driveway in full view of the neighbors, I heard a lot of people tell me that it would get a lot better after 12 weeks.

No, instead, it continued, morning, noon, and night, until the very bitter end.

At nearly 8 months pregnant, I had to leap out of the dentist's chair to go throw up.

I rwaddled (run-waddled) out of innumerable work meetings to go throw up.

I was forced to pull over the car on any number of occasions to barf out the door directly onto the street.

One time I puked into an old Starbucks cup while driving on the highway, because #nogoodoptions.

Adding insult to injury, much of my public vomiting occurred during the half mile walk from where we park our car to where my office is located in downtown. A good chunk of the walk is along Pike Street in downtown, meaning that I got to do my heaving alongside the bums having their morning piss in the alley. Naturally, during the first trimester, people must have assumed I was hungover. Early morning barfing in an alley? Yep, I'd default to hungover too.

But the worst part actually came as I got more and more obviously pregnant. Because the world pretty much thinks of morning sickness as an early pregnancy thing, watching a walking planet projectile vomit in an alley at 7am tends to make people think that you're drinking while pregnant. The looks I got... let's just say that I started croaking "morning sickness" to pretty much anyone in the vicinity.

The thing is, over time, the whole thing took on kind of an absurd, surreal quality. When you're yakking all day, every day, all over creation, you really have two choices: either you can wallow in misery and curse the pregnancy gods... or you can OWN THE SHIT OUT OF IT.

I'll give you one guess which option I chose.

All of which brings me too... drum roll please... the Google Streetview tour of:

Some of the Places in Seattle I Barfed While Pregnant

My first inkling that my version of morning sickness might not be as discreet at the movies made it out to be came about eight weeks into my pregnancy at the Holiday Inn Express at Seattle Center.

Actually, it happened in the parking lot: 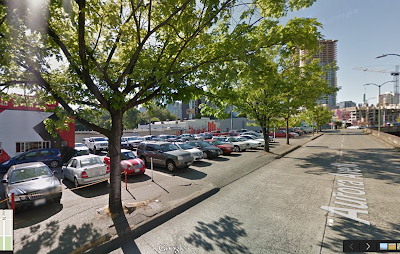 Mark and I were driving to work. I'd already spent a solid 15 minutes that morning dry-heaving into the toilet, and on the advice of my midwife, countless blogs, and the tales of many many wives both old and young, I decided to shovel down some saltines. Saltines: the cure all for mouth moisture and morning sickness!

Of course, saltines turn your mouth into the Sahara desert, so I chased them with some water.

We were halfway down town when I realized that there was no chance I was actually going to work that day. My salivary glands were working overtime in that way they do when you're super nauseous, and my stomach was churning. So I emailed my office, dropped Mark off, and turned around to head home.

My white knuckle grip on the steering wheel and my stubborn resolve that I would not barf in my car kept me going for a mile, maybe a little more. I hit the on-ramp to Highway 99 off Denny Way when I realized that I was completely F-U-C-K fucked. My only option was to pull over in the nearest parking lot, which happened to be that of the Holiday Inn Express.

I pulled in next to a pick up truck, thrust open the door, and immediately yakked all over the pavement. I sincerely hope that the driver of that truck didn't have a passenger, because that person was going to have to step in a mess of glue-y saltine barf. It was a humbling experience, to say the least.

The alley between 1st and 2nd on Pike Street 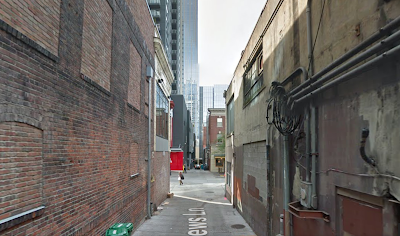 From this angle, you can see the red and gray corner of the City Target peering through. If it had been around 7:15am any weekday between November 2013 and June 2014, you also likely would have seen me, bent over, puking my guts out at the entrance to the alley. For the record, this alley smells like piss. 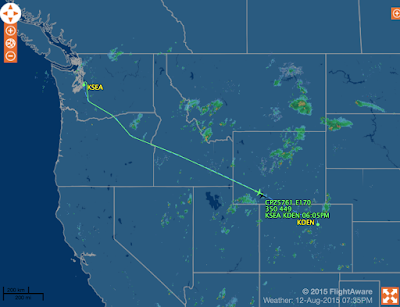 When you this, please hear the tune "Somewhere over the Rainbow" in your head. It makes it so much funnier.

Somewhere over Wyoming,
Way up high,
There's a bag that a barfed in once,
Then a second time...


Actually, then I barfed in the airsickness bag allotted to the seat next to me, which was mercifully empty. Then the guy in the aisle seat reached over and discretely handed me his, which got me through landing in Denver. Naturally, the turbulence flying into Denver meant that I got to do all of this vomiting while safely buckled into my seat in full view of all the other passengers. 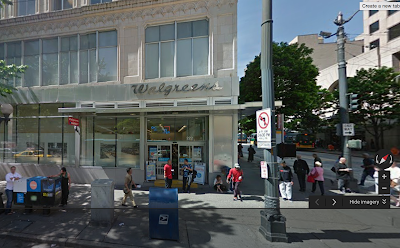 This may be the sketchiest corner in all of Seattle, and on several occasions I had the joy of barfing into the trash can on the corner outside of the Walgreen's. One time some guy looked pretty upset about it and in hindsight I wonder if his dealer hadn't just hidden his morning fix in there. At the time, I didn't know that this was a common practice at this corner, but apparently it is (or was... Seattle's trying to clean it up).

Outside the Bartell Drugs in Upper Queen Anne 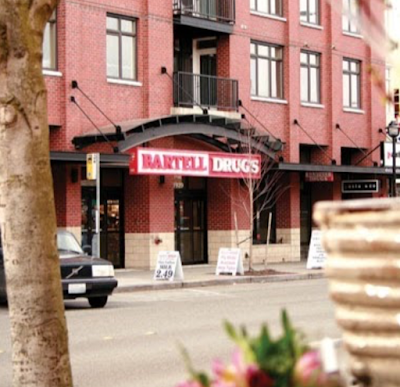 I made Mark pull over basically right where that yellow bus stop sign is, just to the left of the Bartell Drugs sign. I already had the door open by the time the car stopped. 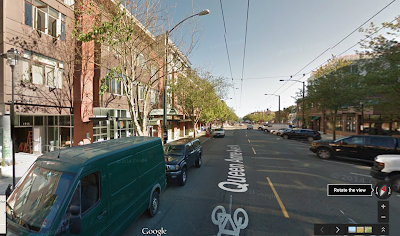 Lest you think that Bartell's was the only business to get punished that morning, I actually had to just mosey on down the block, stopping basically in front of every tree you see there on the left edge of the frame. Bus stop bench... blech.  Tree in front of the Zoom Clinic... blech. Narrowly avoiding the shoes of some poor soul walking by... blech. I was able to get back in the car at the end of the block. Mark just trailed me. 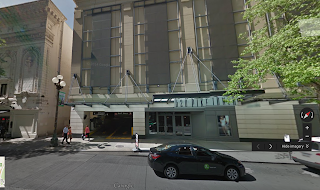 Welcome to my office building, which was perhaps punished harder and more resoundingly than any other structure during my pregnancy. Here is a list of all of the places I barfed in and around this building: 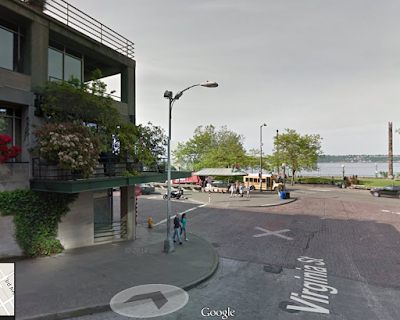 See those railings next to the lamp post? I leaned over those to barf in the alcove. A lot.

You can't see it because the white car is blocking it in this image, but there is a trash can right outside of Pear Delicatessen in Pike Place Market. I was a frequent flyer at that trash can.

Honestly, just all of Pike Place 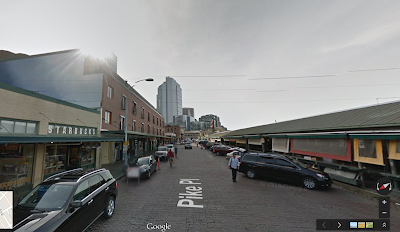 If you see a trash can along the main drag of Pike Place Market, there's a good chance that I hit it at some point. Maybe multiples times. Also several doorways. I felt bad about those. 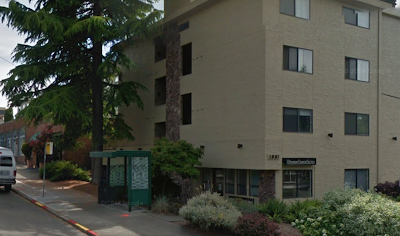 This bus stop... this bus stop got punished. Many times. Mark and I would drive by this bus stop approximately 90 seconds after leaving our house, which was usually just enough time for the effects of the car to kick my gag reflex into overdrive. We'd get through the stop sign at Howe, and then I'd practically be lunging out of the car. Pretty sure that people had to scatter a few times to avoid the splatter. 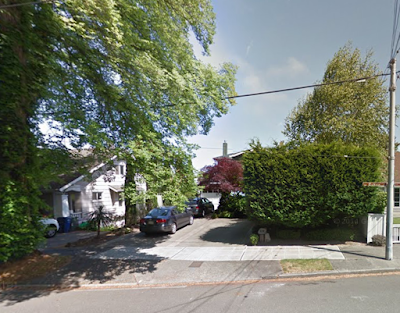 Well, in fairness, also our front porch. And lawn. And the flower beds. When the hell did Google take this photo by the way? Mark and I almost never park the cars one behind the other like that...

All I can really say about the driveway is that, well, it was the frequent recipient of the stomach contents that came up between the time I left the bathroom (always my last stop before heading out the door) and the car. Sometimes I'd try to dart back in the house to make it to the bathroom, which resulted in memorable moments like the time I threw up rice all over our doormat. It turns out that rice is incredibly tough to get off your porch. I think the dog ate a lot of it.

P.S. Yes, we do plan to have a second baby. I've already survived 9 months of this, right? What's 9 more?! Think of all the new places I'll hit!
Labels: Humor morning sickness Parenthood pregnancy