Getting obsessed with songs: Toddler Edition

Pause for a moment and sing to yourself "Row Row Row Your Boat." Got that melody in your head? Good.

Now imagine singing that song approximately five million times over the course of a month.


Let me start out by saying that this is probably my fault. As evidenced by posts here and here, I have a tendency to get obsessed with songs. So the fact that my toddler gets obsessed with songs... well, let's just say there may be a genetic component there.

The main difference between me and my toddler, however, is that while I listen to my song obsessions privately on my headphones, my toddler wants me to sing her favorite song. Over. And over. And over again. And one more time for good measure.

Another confession: I do not have a good singing voice. Like, so bad that before I had a baby, I was convinced I would never, ever sing in public. By public I mean in front of any other human including my husband.

Of course, as we've all learned via this blog and innumerable other sources, parenting really takes one down a few pegs in terms of the "nevers" and the "I'd rather dies" and the "you'd have to kill me firsts." Really, 99 percent of parenting, as far as I can tell, revolves around backtracking on things you swore you'd never do.

Hence singing in public. Which I now do all the time.

Now "Sing sing" wasn't so bad. Avery would scream a name and I would sing to that person. I sang it so many times that I didn't really even think about it. I also became impervious to having it stuck in my head. I could sing and sing and sing and then as soon as I had the opportunity to stop, it just left my brain like it had never been there. This was small consolation to the people around me who got to hear it on repeat in their brains for hours after the fact, but there was really nothing to be done.

The week between Christmas and New Years, Avery's new daycare teacher introduced a new song. The first time I heard Avery request it, I didn't have a clue what she was talking about.

"Yayo Fawm! Yayo Fawm!" she'd scream, while I desperately looked around to see what she might be referring to and offered platitudes to try to prevent an escalation to full-scale tantrum.

It took 24 hours to figure out that "Yayo Fawm" was "Old McDonald."

WHAAA??? you say? Pause and think about it. "E-I-E-I-O".... ya-yo. She added the farm part because she was trying to help me understand. 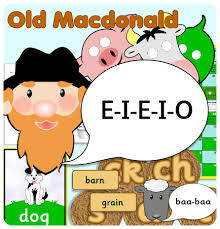 Let me tell you, "Yayo Fawm" is a different animal (pun intended) than "Sing Sing." First of all, I don't find the melody as appealing. Second, if I was once under the impression that Avery was obsessed with "Sing Sing," let me tell you, I was wrong. I didn't know what song obsessions looked like until "Yayo Fawm."

Over the past two weeks, we have learned such important things as how to give voice to inanimate objects. Did you know that Old McDonald had some... beads? And what do beads say? Well, when your toddler is waiting, they say "with a click clack here and a click clack there, here a click, there a clack, everywhere a click clack...."

I can now also tell you what the mama, the dada, the chair, the cracker, the car, and any number of other completely non-barn related people and objects in residence on Old McDonald's farm say.

Did I mention Old McDonald also has lions? And tigers? And bears? Oh My! And bunnies. Which say "thump" (because Bambi).

At some point, any human who has been forced to sing Old McDonald thousands of times will crack. When that human cracks, that human will turn to YouTube. Which is what this human did.

And when this human turned to YouTube for a reprieve in singing (if not listening to) "Yayo Fawm," this human's toddler discovered something else buried in a playlist of toddler tunes while her mother was trying to cook dinner and preserve her sanity. That something else was "Yes Do."

"Yes Do" is a classic call and response song.

But when you have an 18 month old who just wants to hear the song, what you end up with is one person singing both the call and response... Over. And over. And over again.

It turns out that Avery "yes do" about many things: mama, dada, grandma, grandpa, Putty (other grandpa), Amma (other grandma), bath, chocolate, juice, teddy, bunny, "affe" (giraffe), bunny again, other bunny, bathtub pirate (a plastic toy pirate), etc. etc. Do you know how many times you can sing "Yes Do" in a five minute period? Probably about 100.

While I unequivocally took the brunt of "Yayo Fawm," Mark seems to be the preferred vocalist of choice for "Yes Do." And Mark is rapidly reaching his breaking point. Not that one can blame him. Over the past few days, there is approximately a five second interval between the time he enters a room and the time "Yes Do" is requested. And because toddlers have no concept of time, saying "not right now" only saves him for, oh, another five seconds or so.

So last night, we're in bed. Both of us have given at least a few hundred rousing renditions of Avery's present song obsessions (by the way, she's now starting to specify which parent she wants to sing the song at a given moment, to the point of cutting off whichever parent decided to take one for the team and start singing first). And Mark starts complaining: "Yes Do" is the worst... so much worse than "Yayo Fawm." It's so much shorter that I have to sing it more times... yada yada, blah blah, someone call me a whaaaa-mbulance.

And at that point, we both just lost it. And by it, I mean our sanity. We lay side by side, laughing like hyenas, tears rolling down our faces, intermittently and breathlessly uttering "Yes Do!" and "Yayo!" like a couple of mental patients.

We may not make it out alive.

And just in case you want to avail yourself of any of these musical gems, here you go. You've been warned.