I've been meaning to post this one for a few months, but alas, my summer was completely insane and involved three major work projects and travel to no less than 7 different states over a 6 week period. Not kidding.

But while work was helping me rack up the frequent flyer miles, my precious baby was rapidly going full-blown toddler on me. I might have been up in the sky, but she made it her mission to take her poor parents down a few pegs.


I'm going to come right out and say it: I was the smug mommy. Mark was right there with me. I know how it happened: we had an easy kid.

From the get-go, Avery was a good sleeper. Sleeping in her crib at 2 months, sleeping through the night at four months. She rarely gets sick (until a few weeks ago, we'd only made one trip to the pediatrician that was not a "well baby" visit). Teeth were something that simply appeared. There was never any crying or obvious discomfort. She's happy at pre-school. She's happy with her grandparents. Has no problem being away from mom and dad during the day, or even overnight. Good eater (at least until the pickiness kicked in around 18 months). In other words, rockstar kid.

And damn, were we smug. Running around, extolling the virtues of sleep training and raising our child in "a community," and feeding her the same foods we were eating from seven months of age...blah blah blah. 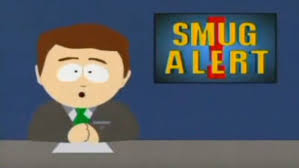 Leave it to a two year old to take some smug asshole parents down a few notches.

The scene: The Ballard Locks, Memorial Day. It's chilly (as happens in Seattle in May), but not raining. After brunch, we decided to go check out the salmon ladders and watch the boats in the canal. Cool.


By this stage, Avery had reached what we then thought was the apex of the toddle-dawdle. She didn't want to be picked up (ever), but her walking pace was staggeringly glacial. In order to encourage her to move along, Mark came up with a game -- run to the next salmon-shaped medallion along the path through the Locks. Awesome. We're moving.

Then something else started to happen. Every time Avery would reach the next medallion, she'd slap her palm down and shout "mine!" Being the smug parents, each time we'd calmly explain that the medallions were for everybody, believing that this gentle reminder would cement in her head the notion of public property, sharing, and kindness.

So she ratcheted it up a few notches.

Midway through the Locks, Avery alighted on some industrial-looking thing embedded in the walkway. A minute or so later, a little boy toddled over to join her. The instant he got close, her face turn to stone. "No, it's mine."

Me: "Sweetheart, it's for everyone. Let's share with the little boy."


The little boy's mother came over, took one look at my little pig-tailed toddler doing her best impression of Chucky and looking increasingly enraged, and re-directed her son elsewhere. Crisis averted.

We spent the next 30 minutes walking and reminding Avery about how it's important to share things, to say please and thank you, to give other people a turn.

She didn't say it, but I'm pretty sure she was thinking: "I'll show these assholes..."

And show us she did. As we were leaving the Locks, Avery continued to attempt to conquer and appropriate every salmon medallion she found. Columbus would have been proud of her wanton disregard for the claims of the natives.

But the real coup de grace of this whole adventure came when a small boy, about 15 months old, approached with his mother. Upon noticing his approach, Avery summoned the death stare and declared the nearest salmon medallion hers. Once again, Mark and I reminded her to share.

Meanwhile, the little boy's mother was encouraging him to go pick a flower from a nearby bush and give it to Avery. He was sweet and guileless and looking to please his mommy (as one year olds are), so he dutifully toddled over, plucked a flower, and presented it to my Toddlebot who was by this time in full pout.

"Avery, look what the boy got for you! Can you say 'thank you'?"

Avery looked at the boy, looked at the flower, looked at the boy again. And then, with a swiftness that could only have been mustered by unchecked greed and lust for this flower, snatched it from his hand, screamed, "MINE," and took off, leaving us -- her previously smug parents -- watching as she ran away with all of our smug and a good deal of our dignity. We got to stand there as the little boy's mommy looked at us with that same combination of pity and disgust with which we'd viewed so many parents of questionably behaved children in the past.

We stammered out some apologies peppered with "she's not usually like this!" and then took our leave, knowing that we'd been so wrong all along. We didn't raise an angel. We had no control. When the smug abated, we'd been exposed as fools. There was nothing to do but stand in the shame.