A little over eight years ago, I stood at a polling station in the Clarendon neighborhood of Arlington, Virginia and thought long and hard about the vote I'd cast.

One choice was Hillary Clinton, a woman of tremendous accomplishment and rich experience whose decades in the public spotlight had been hard on her.

The other choice was Barack Obama, a young candidate with much less experience, but whose vision and soaring rhetoric were igniting renewed passion and hope in a nation sorely lacking those things.

No matter what choice I made, one of these candidates would make history: Barack, as the first black man to be a major party candidate; Hillary, as the first woman.

I voted for Barack. I've thought about that choice every day since.


To be clear, I think President Obama is a good man and a good president. I voted for him again in 2012. I do not for a second regret my choice.

Eight years ago, I stood with a ballot in my hands and I decided not to vote for a woman. Today, I got my second chance. Today, I voted for a woman to become President of the United States. There are women still alive in this country today who didn't even have the right to vote when they were born. The historical significance of this moment can not be understated. 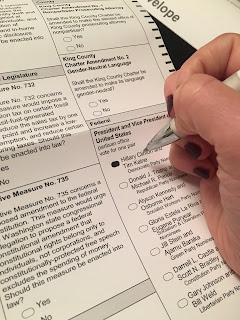 I voted for Hillary because her domestic and foreign policy experience is unrivaled in the United States today. She's worked on incredibly challenging issues from healthcare and education to international trade.

I voted for Hillary because she has a proven track-record of working across the political aisle. In a government paralyzed by the most petty, passive-aggressive partisanship this nation has ever seen, we need a President capable of building consensus. I know that this means I won't get my way on everything. I know it means compromising on issues I hold incredibly dear. But compromise represents the only way forward. It is our only hope to break the gridlock that threatens the country in which I was born and raised. This vote is a vote in favor of a country that will be even better for you than it has been for me, my darling daughter. It represents a resilient faith in the essence of the American dream: that we will leave something better for our children.

I voted for Hillary because she understands that this nation of states united is a work in progress, and that our ability to thrive depends on our willingness to evolve. She looks forward, not back.

There's another reason, and it's one that a lot of people have shied away from. I voted for Hillary because she's a woman. To be clear, I would not vote for just any woman. Hillary's stance on important issues aligns to mine. But her experience as a human aligns to mine as well.

In 2004, I was 19 years old and working at a nice restaurant in Washington, DC. I was a waiter (in fine dining, they don't use gendered terms for servers), and I regularly served DC's elite clientele, from lawyers and lobbyists to ambassadors and congressional leaders. One evening, an older man, probably in his early sixties, was seated alone at a table in my section. I approached him, offered water, and took his drink order -- Johnny Walker Blue Label (the good stuff), neat. When I returned with his cocktail in hand, I asked him if he had any questions about the menu. He replied that he did, and asked that I send over the waiter. I smiled nervously, and tried to calmly reply, "actually sir, I'll be your server this evening." He didn't miss a beat when he asked to speak with my manager. Another waiter (a male waiter) was assigned to take over the table.

This story is probably the most overt example of staggering sexism I have to share, and in that respect, I guess I'm pretty lucky. But it doesn't account for the thousands of small slights and indignities to which I've grown accustomed -- the thousands of paper cuts that slowly bleed women like Hillary and me, threatening to weaken our resolve.


We have come so far, my darling daughter. We have so far to go. But we will never get there if we don't select leaders who have lived our experience.

In the United States of America, our system of government encourages voters to elect to office those who will best represent the values and lived experiences of their constituencies on a national stage. It is time for women to have that representation in the nation's highest office.

So, dear daughter, I voted for Hillary Clinton for President of the United States. It's easy to say I did it for all women, and maybe even easier to say that I did it for you, because I love you and I want to give you a world that's better than mine. Those things are true.

And I hope it brings you one step closer to the same opportunity -- to vote for someone who shares your values and understands your lived experience. To cast that vote without the weight of such profound historical significance.

But most importantly, I did it for me. 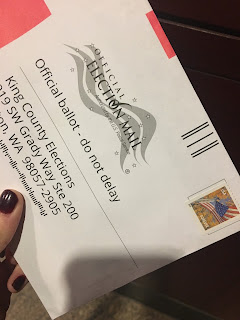