The Vehicular Miracle at Palm Springs

A few weeks ago, I traveled to Palm Springs, California, with my two children. My husband, Mark, was taking the California Bar Exam (long story, too much of a digression for this post), and I volunteered to fly alone with our two children, ages 3.75 years and 3 months, respectively, in order to facilitate a mini family vacation.

Did I mention I volunteered to fly solo with our two children?

If you're questioning the wisdom of this choice/my sanity/why the ever-loving fuck I thought this was a good idea, join the club. The reaction of both sets of A and L's grandparents was essentially the same and pretty much summed up the endeavor: shock, attempt to get a handle on said shock, forceful volunteering to drive me and said children to the airport, insistence on driving me and said children to airport, dismay and incredulity at my refusal to be driven to the airport.

See, the thing is, I had a plan (Who me? Plan something? WHAT???). And I knew that pulling off said plan with confidence meant that I needed to get through Part 1 under my own power.

What was Part 1? Getting from the airport parking lot to the baggage check. Part 1 was critical because it would prove to me that I could successfully navigate an airport while managing the following items:


Why was this proof critical? Sure, it would have been easier to have grandparents there to help navigate the airport with all this stuff, but I resisted all offers of help by keeping one important fact in mind: no one was going to be there to meet me in California. If I couldn't do it all on my own at the very beginning of the day, how was I going to manage after several hours in an airport and on a plane when everyone was tired, especially knowing that we'd also have to rent a car and I'd have to install not one but two car seats? It was good motivation.

Against all odds, the whole day went shockingly well. The Lady A cooperated like a champion. She was pleasant. She was helpful. It was miraculous.

And somewhere along the way, foolishly thinking that we'd get to select our car from a row (as you do at major airports where the keys are simply in the cars), I floated the idea that we could select an Elsa blue SUV.

Because I am a moron.

We arrived in Palm Springs without any tantrums or meltdowns on the part of either child. If you're a parent, I'm sure you can appreciate the unprecedented nature of this relative calm. At the baggage claim, it became clear that nerves were starting to fray, but still, we maintained a fragile equilibrium.

And then we arrived at the car rental counter.

There were a few people ahead of us in line, so I snaked through the rope line, 50lb car seat back pack on my shoulders, stroller in front of me, suitcase rolling behind me, all while gently cajoling my three year old forward. We were next in line when I turned around to check on the toddler status only to see the heavy metal pole at one end of the rope line start to crash downward toward the toddler's head. In a moment of sheer terror, I gasped and lunged for the pole, which narrowly missed the toddler's skull. Seeing my face and hearing the clatter, all hell broke loose. She started sobbing. I picked her up. Thirty-six pounds of three year old now flailing in my arms. Car seat bag on my back. Suitcase. Stroller.

And then the car rental clerk summoned us forward.

Somehow, I managed to maneuver so many burdens the six feet to the counter, whereupon I deposited my sobbing toddler on the floor and began the process of getting our rental car.

The clerk opened with a joke. Because I was trying to manage a sobbing toddler and an infant on the brink of losing her shit, I missed said joke and instead gave him a look of complete incredulity.

I handed over driver's license and credit card. I reminded him I'd paid the reservation in advance. And then the litany commenced.

"Ma'am, we recommend that you purchase the vehicle protection package."

"But in the event of an accident, this would fully cover any damage."

"But ma'am, without this coverage, an accident will increase your insurance premiums."

"Ok ma'am, would you like glass coverage? This covers any damage to –"

"What about protection for the vehicle's interior? We recommend this for people with small –"

"But if juice spills this would –"

"They drink only water."

"Ok, ma'am, today we can offer you an upgrade on your vehicle."

"It would be an additional –"

As I initialed, I looked down at my still sniffling three year old. It is at this moment that I hear the jangle of keys, and have a terrible realization: I do not get to pick my car. The car I will be driving has been pre-selected for me at random. Odds are, it is not Elsa blue. Or even blue at all.

And then, amazingly, the rental car desk clerk uttered the one thing he could possibly have said to make this situation worse: "Ok, ma'am, here are the keys to your hot pink Hyundai Santa Fe."

My head whipped around, my mouth open in total shock. He must have seen the completely murderous look on my face, because the retraction commenced pretty quickly.

I stared at him for a few beats in silent incredulity before I slowly took the keys dangling from his outstretched hand and replied in a hushed tone: "do you know what would have happened if my toddler had heard that?"

His mouth hung open but nothing came out.

"She would have expected a pink car. And I'm guessing you do not have any pink cars. Let alone a pink SUV." [Long pause and death stare.] "We'll be going now."

I grabbed the suitcase and the stroller, told the toddler it was time to find our car, and off we went, floating on exhaustion and rage toward some anonymous Hyundai Santa Fe into which I still had to install two car seats. After the car seat install, we still faced a grocery store run.

We walked down the path toward Row D, where I'd been told our car was parked. Righteous indignation had taken the place of the space number the car rental desk clerk had told me. I remember the row, and to the right, and nothing more. We arrived at the row. I looked down and saw an expanse of black, beige, grey, and red SUVs. I was F-U-C-K fucked. We made the turn. I pulled out to key and clicked "unlock." Far off in the distance, a car beeped. Taillights flashed. I blinked. And then a miracle happened.

There was one blue SUV on the lot, and I was holding the keys. 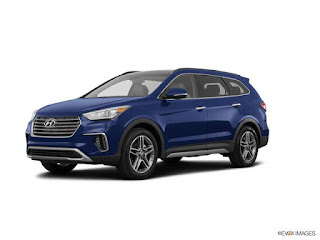 "It's coronation blue, honey! It is!"

"I love Elsa, mommy. And I love her coronation dress."

"I know, honey. And we have a coronation blue car."

I very nearly shed a tear. It was a vehicular miracle.

*Coronation blue is the dark shade of midnight blue Elsa wears during her coronation in the movie "Frozen." I think the dress might actually be black, but I'm not going to make a thing of it.