There's an organ in my office

Almost a year ago, I received a text message from my husband: "we're going to have an organ in our garage."

The organ to which my husband was referring was not of the black market organic material variety. We weren't going to be auctioning if off to any diseased billionaires.

No, the organ to which my husband was referring was of the musical variety. In other words, cumbersome and absolutely useless to a household of people disinclined to church attendance and sorely lacking in musical ability.

Now, you may be imagining those many-piped contraptions native to cathedrals and evangelical mega churches. What you're imagining is a pipe organ. What I'm talking about is a pump or reed organ. Essentially a large (and heavy) upright piano that basically no one in the continental United States (more on this later) know how to fix or tune. How do I know this? Because one now resides in my house. 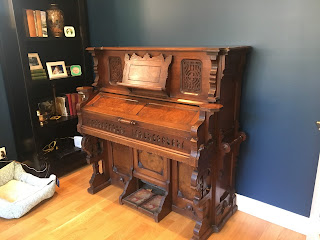 To be clear, my house is of the modern persuasion. Open floor plan. Stainless steel appliances. Clean lines and linear design. This organ... it is not. It looks as though it was meant to live in a church, or an old Victorian house. It has ornate crosses and platforms designed to hold candles. It screams traditional values and religious zealotry. It is such a massive departure from the rest of the design scheme as to be absurd, and we've managed to incorporate Persian rugs into our interior decor.

As it turns out, Mark's family has an extensive and glorious history of preserving relics. See e.g. the antique oil lantern that adorns my living room. This lantern belonged to one of Mark's long deceased relatives, specifically the (many many greats) aunt who hauled herself, alongside her sister, to Washington state and established a homestead, which at the time required a door and a lantern. The sisters – smart, industrious cookies that they were – built one house with two doors and two lamps that straddled two pieces of property. We have one of those lamps. Mark's brother has the other. Someday, my girls can fight over which of them has to incorporate this into their decorating scheme.

The thing about this organ is that I didn't know that it even existed until the moment I was informed that it's hulking frame was going to live in my house. When Mark and his brother were young, his parents foisted it off on one of my father-in-law's law partners. Said partner kept it in his stately and organ-appropriate Seattle home for the better part of three decades until he and his wife decided to divorce and sell the house (organ pictured in said house below). 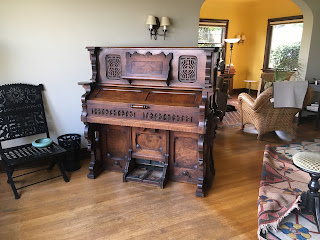 No house, no organ, so now the organ reverts to the original heirs.

My first thought was to sell it. But what's the value? How do you price it? And who is going to buy it??? Finding anything online that would even get us close to an estimate proved impossible.

Then I thought, "we can donate it! Some local church must want this wonderful piece of antique musical art." But I have kids and a job and calling around to local churches somehow never made it high enough up the priority queue to actually get done.

There was also the soothing balm of passing time. I first learned about the existence of the organ in Spring 2017. It wasn't until March of 2018 that the house finally sold and I had to confront the reality of arranging to have an organ moved into my house. During that time, I slid into a degree of denial tinged with curiosity: maybe we won't ever have to actually take possession of the organ, and if we do, wouldn't it be fun to know what it's actually worth?

Now, I have to make a confession here, because it was this line of thinking that led me to decline when the buyers of the law partner's house offered to pay us $800 for the organ. Mark was willing to entertain the idea. I shut it down. All I could think was "$800? It's over 100 years old, FFS!"

Admittedly, I also felt some deep-seated guilt about simply letting go of a family heirloom so casually. $800 for a part of my daughter's family legacy?

If you're thinking I'm a idiot, you'd be correct.

Instead, on March 21, 2018, with 10 days left in my maternity leave, I found myself meeting piano movers at the house on the other side of town in order to move an organ. Let me tell you... this is not a straightforward thing. It's heavy AF. It's not on wheels. All of the exits involved multiple uneven stairs followed by a very steep slope. See below: 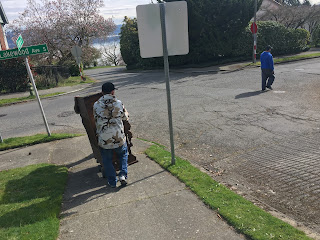 The picture doesn't do justice to the grade of the hill. It took two guys to get it down safely, and even so, I kept imagining the thing busting loose and careening down the hill into Lake Washington.

But the organ made it onto the truck, and the truck made it to my house, where the movers assembled a makeshift ramp down the stairs and slide the thing in.

So I now have an organ in my house. It sits in the office, as out-of-the-way as possible. It occupies an entire wall – so big that it blocks either the bookcase and the door.

It also doesn't work. The foot pedals are completely broken, meaning that there's no way to pump air into the organ to give it voice. The fact that this giant piano-looking instrument is completely silent was a great disappointment to my almost-four-year-old.

The day it came home, I actually did do the work to track down a guy who fixes organs. He's based somewhere in the flyover states, and he's the only person in the country who works with these types of instruments. Based on information on his site, our organ was built sometime between 1897 and 1917 in New Jersey. After 1917, the company went out of business.

A few weeks from now, we'll be visiting my brother-in-law and his family, along with Mark's aunt and uncle – the other heirs to the organ. At that point, we will hopefully come to a real decision about what we're going to do with it. I hope for my own sake that I don't get stuck with it just based on inertia.

If that happens, I guess my daughters will one day have to fight over who has to take it. Thinking back on it, the daughter who gets the oil lamp is really the winner of the argument. The loser gets the organ.