I was informed that there was no Santa when I was six-and-a-half years old, on a June day, on the way to the local community swimming pool.

Who had just turned three.

If that isn't a massive "fuck you" way to have one of your most cherished childhood beliefs crushed, I don't know what is.

Some adults will tell you that they are still traumatized about having been lied to about Santa. Some will tell you that finding out that Santa wasn't real was one of the most painful moments of their childhood. I admit, I cried. I went through the five stages of grief while I attempted to prostrate myself / murder my sibling while buckled into the carseat.

But you know what? I came out the other side with a great story to tell. My three-year-old sister took a pot-shot at my childhood as revenge for some perceived slight that neither one of us remembered five seconds after it happened. The beauty of hindsight is that it makes shit hilarious.

Side note: years later, my sister also informed one of her rather naive and sheltered childhood friends (I think they were 8 or 9) that Santa wasn't real. She did it because her little friend pissed her off. I'm pretty sure it was the last time they played together. Jenna still tells this story with absolute, unbridled glee. Moral of the story: don't fuck with Jenna. She is the anti-Santa.

When it came to my own children and the Santa myth, however, I guess I'd just never really thought about how I'd handle it. I married a man who, until producing an offspring, prided himself on his likeness to scrooge, so I figured I was going to have to concentrate my efforts on the things I really cared about... like having a tree and dragging out the china for Christmas Eve dinner.

But it turns out that having a baby is an event that produces both an immense amount of nostalgia and an endless capacity for corniness. Once we had the baby, there was no question that we were going full-bore Santa. This included a multitude of gifts labeled "to Avery, from Santa," all of which were wrapped in decidedly different paper with decidedly different gift tags than the gifts from Mom and Dad. Yes, it was ridiculous. If you must, consider it practice for next year when she might actually start to become aware that there is a distinction to be made.

But the real coup de grace was the Santa picture. Somewhere in Mark's dad's house is a box of collage frames filled with pictures of Mark, his brother, and in later years, their black pug, Nelson (for Mandela, not kidding), with Santa (apparently, once the boys were sullen adolescents, the only way their mom could get them to go was to bring the dog). The sweaters and the hair in these pictures is just so epic.

Anyway, I never thought in a million years that Mark was going to go for the Santa picture thing, and frankly, I didn't really care. My parents did the Santa thing maybe once or twice, but by the time my then two-and-a-half year old sister smelled something fishy and called them out, I think they decided that all the standing in line wasn't worth it.

But lo and behold, one day in early December we were driving through downtown, and Mark asked if we were going to do Santa pictures. I looked at him like he had three heads (who was the imposter who'd taken over my husband's body?!), and then stammered out something that started out as no and then became a yes. I think this was the moment that both of us realized that we were going to go whole hog on being absolutely ridiculous cheese-ball parents.

So this is how it came about that five days before Avery turned six months old, she had her first encounter with the counterfeit article at the downtown Seattle Nordstrom. The flagship Nordstrom sets up an entire Santa's workshop at the corner of 6th and Pine, complete with cookies, hot chocolate, and apple cider, as well as some shivering hostesses that will add your name to the wait list and text you when your time has come to enter The Workshop. Naturally, this method of waiting for Santa facilitates having you spend money at Nordstrom. It also quelled any lingering doubts about doing Santa pictures. We don't have to wait in line? SOLD.

We arranged to have Grandma bring the baby downtown during lunch one day, put ourselves on the wait list, and once our time came, stood in line letting other people pass us while Grandma and Avery battled for parking at Pacific Place (the 8th circle of holiday hell). Of course, we dressed her in the most obnoxiously adorable outfit possible. Naturally, she performed like a champion. 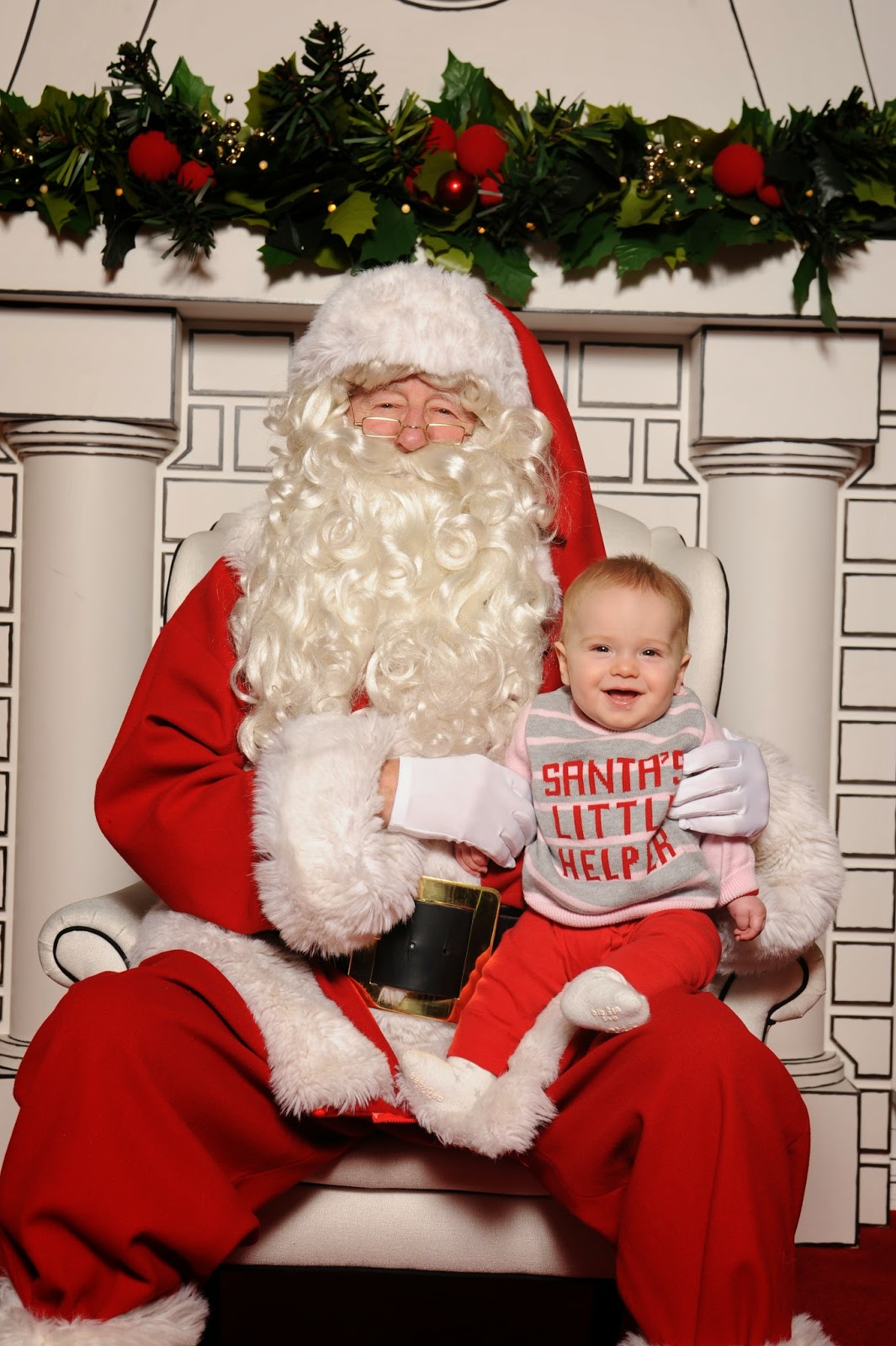 When Avery discovers that Santa isn't real, how much do you want to bet she throws this picture back in our face during the denial phase? It's okay, totally worth it.

UPDATE: After this posted, my mom reminded me a of a delicious little tidbit about my own Santa experience. Apparently, the Christmas before my sister's big reveal, my mom hand written me a letter from Santa, going so far as to disguise her handwriting, telling me that I was a good girl or something like that. Anyway, the point is that when my sister informed me that there was no Santa, I told her that I knew there was a Santa because he'd written me a special letter. At which point, my mom had to come clean. #awkward