Last weekend, we traveled from Seattle to Portland for my sister-in-law's baby shower. We were staying only one night - Saturday - and from the time we walked out our door on Saturday morning until the time we got home on Sunday afternoon, we were gone approximately 28 hours. 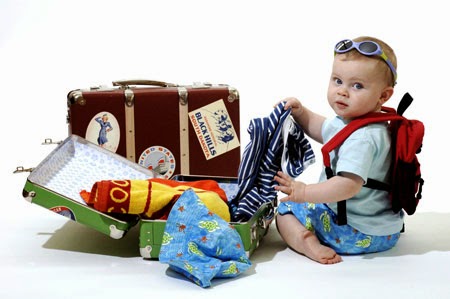 A few nights before the trip, I informed Mark that I was making a packing list. Without breaking stride or pausing for breath, I also told him that we should probably pack some of the stuff the night before. Because, you know, we were going to have a lot of crap.

Mark's response: "but we're only going for one night!"


While I appreciate that Mark's lack of a vagina means he can throw an extra t-shirt, socks, a pair of underwear, and some deodorant into a grocery bag and call it good, there are three important factors that he was failing to take into account.

(1) I am a woman who has never been good at packing lightly (and we were going to a family event, and I was having one of those weeks where I hated all of my clothes). My friend Hitha over at Hitha On The Go has some great ideas for packing lighter. She also just had a baby so we'll see how that goes :-)

(2) We were going to a family event for which we'd been asked to contribute a number of items.

All things considered, I think we actually did pretty well on this particular trip. I managed to only pack three shirts, two cardigans, two pairs of pants, and a single pair of shoes - a minor miracle and largely the result of my desire to avoid having Mark accuse me of being ridiculous. Of course, I also packed a flat iron, makeup, various toiletries, a hairbrush, etc., but I consider those things obvious and not optional.

There there was the stuff for the baby shower:
It is still up for debate whether it was my mother-in-law or father-in-law that decided that the hauling of white plates 200 miles was necessary. Either way, watching Mark progress through the Kubler-Ross five stages of grief over the course of about 60 seconds (they can't be asking us to do this (denial); fuck that, we're not doing it (anger); can't we get someone else to do it? (bargaining); I can't believe they are making us do this (depression); okay fine, I guess we're just going to do it (acceptance)) made the entire thing totally worth it.

Side note: Yes, I am taking a bit of a dig at my in-laws over this particular idiosyncrasy, but it should be noted that I totally won the in-law jackpot.

And then there was the stuff for the baby:
There are also probably a variety of items that we packed that I've forgotten to list here. The amount of crap you carry when you have a small baby is astonishing.