Death by Anticipation: Flying on Planes with 1-year-olds

This Thursday morning, Mark and I will board a plane with our nearly one-year-old child to travel across the country to Virginia for my close friend/former roommate/partner-in-flirting-at-bars Becky's wedding. I have decided that in the future all friendships shall be measured by my willingness to subject myself to the misery of flying with a one-year-old.

When you are the parent of a young child time seems to just slip away from you. Presumably, that's why the fact of this wedding and its associated travel snuck up on us a bit. As in, about a week ago, I went "oh Foxtrot, how are we going to entertain this foxtrotting kid for five hours on an airplane? We can barely entertain her for five minutes in our own living room!!!"

Digression: I'm making an effort to replace fuck and other swearwords with more appropriate substitutes. I'll be very curious to hear the reaction of Avery's kindergarten teacher when she comes into school one morning and tells the class that Costco was a Charlie Foxtrot on Saturday...

Anyway, back to the airplane.


Before last Monday, I'd only ventured into the travel section of the parenting blogosphere on one previous occasion, when we flew to Colorado with Avery last November. The only thing I recall about that little jaunt was this nugget of advice, which, for the record, we took to heart (and from where I stand now, THANK GOD):


When your child is between the ages of 9 and 24 months, it may seem like a lot to spend $500 bucks on a seat when the kid is still allowed to sit in your lap. Just remember that five minutes into the flight, you'll be ready to pay $5,000 for that extra seat.

But with 10 days to go until we actually had to board an airplane with our wriggling, speed-crawling, stair climbing, nearly-walking, preciously precocious liability, I once again returned to the travel section of the parent blogosphere in a frenzy of desperation.

Let me start with the advice we didn't take.

There is a section of the parenting blogosphere that advocates vociferously for the use of car seats on airplanes. They throw around safety statistics and anecdotes about the comfort of your child and any number of strategies for actually getting the carseat installed in the airplane seat... oh yeah, and assurances that it isn't too uncomfortable to have a third of your already-tiny airplane seat taken up by spillover from said carseat. For a few microseconds, I considered what I would be like to have the carseat with us on the plane:

With the idea of bringing the carseat dismissed as a form of torture that is presumably illegal under the Geneva convention, I turned to more practical advice for entertaining the wiggle worm. I'll take the suggested items in turn. Mind you that each of these was suggested for children age 1 and up.

The theory goes that kids like to read books about things that they themselves are doing. Buy the airplane book, read the book and point out the similarities between the plane you're flying in and the one in the book. Simple, right? So I bought two airplane books. One a board book for Avery to chew on, the other a "lift the flap" book because she is obsessed with lifting flaps in books. Imagine the pleasant surprise, then, when these books arrived late last week and it turns out that Avery gives zero Foxtrots about lifting flaps in books about airplanes. Dear Zoo? Amazing flaps! Airplane Flight? Foxtrot that noise. 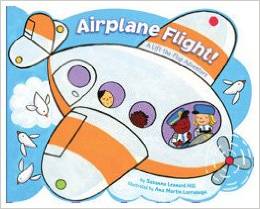 Aquadoodles are kinda like a poor man's etch-a-sketch, and are designed to let kids go crazy with markers without risking destruction to your walls, furniture, clothing, and sanity. 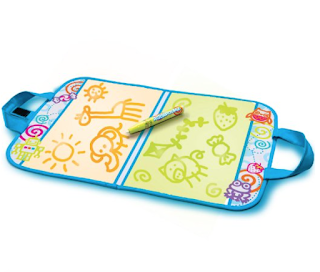 To use an Aquadoodle, you fill a "marker" with water (the screw top on the marker inexplicably screws off and on the opposite direction from every other screw top ever manufactured, a feature which appears to exist for the sole purpose of driving parents insane). The child then puts marker to special "pad" and as the sheer layer on top gets wet, the colored fabric below show through, hence "aqua doodle." When it dries, the doodle disappears. Voila!

Naturally, I couldn't wait to try this thing. As soon as it arrived, I opened it up, filled up two markers with water, handed one to Avery, and used the other one to show her the wonders of aquadoodling! What did Avery do? She slowly raised the tip of the marker to her mouth, gave it a tentative suck, paused, and then began sucking on it like a man lost in the desert. I just bought marker-shaped sippy cups.

I think I vaguely recall having finger puppets as a kid... maybe. Anyway, apparently most little kids love to watch mom and dad wear out their hands putting on finger puppet shows. Not Avery. When these arrived I excitedly ripped open the package, popped them on my fingers, and then watched as she plucked them off one-by-one, stuck each on in her mouth to taste them, and then discarded each in turn as so much chopped liver. 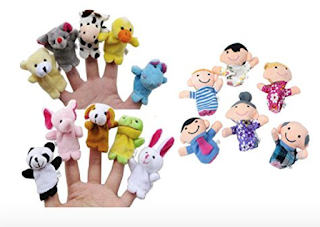 If you haven't noticed by now, the unifying thread between all of these airplane entertainment miracles toys is that Avery gave exactly zero Foxtrots about all of them.

Which brings us to yesterday. As I sat at my desk, watching the seconds tick by ever faster toward "doomsflight," thinking about all of the laundry and the packing and the entertaining that was barreling down on me, I realized that I had to do something. So I turned to my trusty old friend, Amazon Prime.

The old gal did not disappoint.

When I landed on the homepage of Amazon.com, I was greeted with a recommendations screen that, thanks to Big Data and Amazon's shameless activity tracking, accurately predicted that I'm come shopping for baby travel gear and offered up some excellent suggestions.

How many times do you think we'll be able to say "Peek-a-Boo!" on the airplane until the guy behind us turns it into a drinking game in order to drown his misery? No seriously, I'm taking bets.

There is almost nothing that Avery loves more than Peek-a-Boo. She will keep at it for hours if you let her. It remains to be seen whether Peek-a-Boo Panda will be as entertaining as Peek-a-Boo Mommy pulling her T-shirt up over her face (which admittedly, the guy behind us on the plane might find way more entertaining), but it's worth a shot. 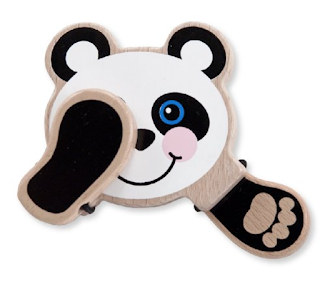 Avery has not yet attained the level of sophistication required to shove a star-shaped block through a star-shaped hole, but she is very interested in putting things in boxes/buckets/bags and then taking them out again. It appears that for this particular toy, the shapes are light-weight plastic and come with a bag, not a box, mitigating the risk off grievous injury to fellow passengers when she invariably hurls one or many of these items across the aisle.

Also, she can totally chew on that dog thing. And the handle. 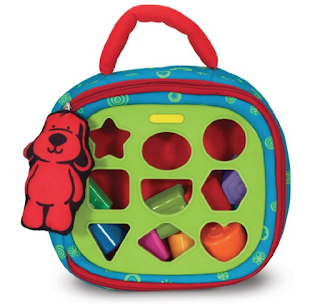 And finally, this brings to the eggs.

There are a few pieces of parenting advice that have stuck with me. One of them is that, when it comes to air travel, no rule is too sacred to break. This means that the ban on Goldfish crackers is about to come to an end. We are going to stuff these eggs with a variety of dry food that won't stain the clothing of the poor folks seated in our vicinity, and use them as an entertainment mechanism if (who am I kidding... when) we get desperate. Judge me all you want. Your judgment is nothing compared to the misery my little nugget is capable of inflicting. It doesn't hold a candle. 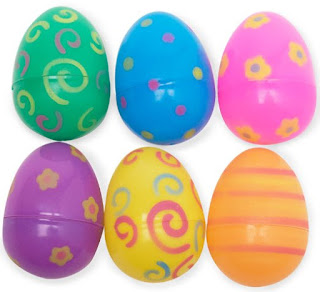 We leave Thursday morning. We're supposed to return on Monday. In case we don't survive the experience with our sanity intact, it's been a fun ride, folks.