Oh, it's your birthday? Unfriend.

For this, I do not apologize. 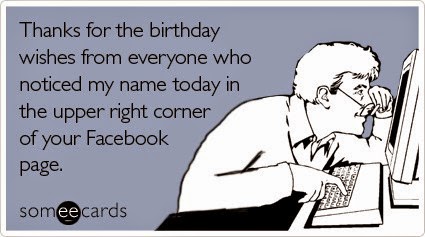 Okay, now that we've established that I'm a heartless asshole, let me explain.

I'm what you could reasonably call a member of Facebook's first generation. When Facebook first came to The George Washington University in late 2004 / early 2005 as part of the second wave of expansion schools, I was a sophomore, and not a particularly well social-networked one. I didn't have a MySpace profile. At some point, I'd created a Friendster account (how dated am I, right?), but had never done a single thing with it. Hell, I hadn't even created an AIM account (the communication platform du jour of my generation's high school and college years) until I got to college because my parents still had dial-up internet and only one land-line.

But then Facebook came along, and suddenly it was everywhere. People were friending each other. They were poking each other. They were already beginning to carefully cultivate their stalking skills by instantly searching for and friending anyone they met at parties, in classes, at bars, on the street. While MySpace was considered creepy and other sites like Friendster barely got off the ground, Facebook was almost instantly ubiquitous among my peers. Everyone was doing it, and I don't mean in the high-school-boy-who-tries-to-pressure-you-into-a-joint kind of way. I mean really. Everyone was on Facebook.

Naturally, my parents reacted exactly the way you'd expect parents to react to a "kids these days" fad. It was almost TV perfect. My dad shared horror stories of job opportunities lost. My mom fretted about all of the people on Facebook who would come rob my house if I posted about going away on vacation (in fairness, she still does this -- hi mom! I have yet to be robbed).

Of course, when it came time for EVERYONE to be on Facebook, many of the members of the original generation balked. Suddenly the requirement that you have a dot edu email address went away, and the clamoring hoards came smashing in. Suddenly, our kid siblings and -- horror of horrors! -- our parents were on Facebook, blithely blundering through their crash-course in social media and taking us along for the ride. I remember one particular incident in which I posted the words "navy blue" in reference to the color of my bra as part of a breast cancer awareness campaign on Facebook, and my loving mother publicly commented on my post about how I shouldn't be publicly disclosing the color of my underwear. As soon as I explained that it was for a good cause (and who cared, right?), I saw a new post appear on my mother's feed: "white." Naturally.

And yet, very few people actually left. Some got quieter, sure. But just gone... not so much.

How do I know this? Because of all of the posts from people who, for the life of me, I can't remember how I know. Sometimes I'll see a name pop up in my feed and think to myself, "do I even know someone with that name?" or "have I ever actually seen this person before?" I mean, at some point, I must have made the acquaintance of all of these people.

But at the end of the day, the fact still remains that I now have no idea who they are. Not the faintest clue. At some point, I tried to go through and just unfriend a bunch of people in one fell swoop, but this proved to be more time consuming than I was prepared for, and I just couldn't stomach spending more time than necessary on these people that I must have met once.

So now, I unfriend people for their birthdays. Whenever I happen to look at the little birthday notification box in the right-hand side bar of Facebook, I scan the names and discretely unfriend the people I don't know. (Okay, sometimes I also unfriend people whose posts are too annoying or who invite me to play Candy Crush Saga one too many times.) 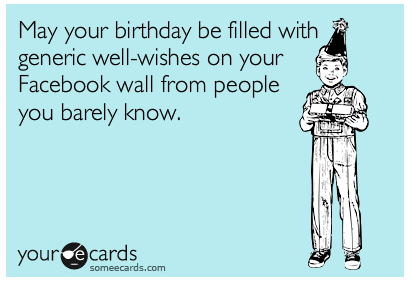 It's funny, because this is generally my only birthday-related activity on Facebook. I never post for people's birthdays. If I like you enough to wish you a happy birthday, I'll call or text you. Don't worry, I don't expect you to wish me happy birthday either.

Maybe this makes me callous. Maybe I'm thinking too much about it. Maybe I've discovered something brilliant that's going to help you clean up your Facebook feed. Don't be shy, my friends. Revel in the unfriending.