You need a Nosefrida

One of the truest things I was told about parenthood is this: every parent you know will provide you a list of crap they swear by. Which you will register for / purchase. And then never use.


Here's a sample list of just some of the baby items we just had to have, and then never actually used:

Now that we've gotten that out of the way, I'm totally going to be that parent and tell you what you really just have to have (!) for your currently gestating bundle of joy.

You need the fucking Nosefrida.

Do not believe the nurses at the hospital when they tell you that the little blue snot sucker bulb works just as well as fancy baby snot suckers... ahem, nasal aspirators. They do not.

They are also impossible to clean, and when you are wrestling with your wriggling, kicking, screaming 7 month old who would rather drown in her own mucus than allow you to get near her with this thing, they become a total liability for things like:
The Nosefrida, a device brought to you by the Swedes (of Ikea and delicious meatball fame), considerably reduces the risks of fuck ups like this. The portion of the device that makes contact with your baby's nose is much wider with a rounded end, make it much less weapon-like than the bulb.

The main problem with the Nosefrida, and the reason I waited so long before caving to this most magical of baby devices, is that it requires you, a human, to place one end of a straw in your mouth, and the other end in your baby's nose, and suck.

For me, this admittedly presented a bit of a psychological hurdle. But a solid two months into the never ending runny nose that evidently (according to other parents), constitutes the first four years of the human experience, I'd had one too many close calls with the snot bulb and I couldn't take it any more.

It turns out that the Nosefrida is not nearly as horrifying as I'd imagined. Indeed, those crafty Swedes made sure that transference of mucus from Avery's nose to my mouth (or even close to my mouth), was not going to happen. First of all, the tube is too long. Second, unless your baby has the world's biggest and most congested sinus cavity, there is simply not enough bodily fluid in there to make it through the straw. Third, the folks at Nosefrida, Inc. knew that selling $15 snot suckers was only going to go so far. They needed a subscription model. So in order to use the Nosefrida and prevent germ transference, you use these little blue foam filters that you're supposed to change every time. At about 50 cents a pop, I decided that 3-4 uses for each one was probably fine...

Naturally, the weird smiling baby on the front of the Nosefrida box is not really representative of how small children react to having their sinuses vacuumed. The reality is something more like this: 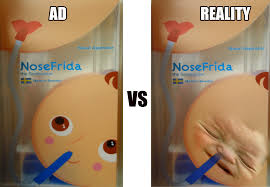 It's a damn miracle. Please, learn from my mistakes, people.

So what else do you truly need?
I welcome other suggestions in the comments from other parents. What was a waste of money? What item saved you in your darkest hour?

Of course, you can take or leave any or all of this advice. Except for the part about the Nosefrida. Just do it.