One of the fascinating things about becoming a parent is realizing just how incredibly dirty and innuendo-filled children's books and entertainment actually are. Things that blew right past me as a kid are now cause for much immature and frequently hysterical laughter. Mercifully, right now Avery is far to little to make the connection between the words I've just read and my total inability to continue reading coherently. She just thinks it's funny that I'm laughing. This window is rapidly closing, however, which means I need to figure out a way to get my shit together and be a grown-up in short order.


The worst offender (so far) among children's literature is a book called "The Owl and the Pussycat," based on a nonsense poem by the noted nonsense poet Edward Lear. Penned (or at least first published) in 1871, it is somewhat difficult to determine whether Lear's choice of words and turns of phrase were intended to be outright dirty or merely absurd, but I'm going to put my money on the former, because, well, see below.

I remember my mom reading this book to me when I was a kid, and I remember loving it, and the beautiful illustrations of pea green boats and slices of quince. Now, as I try to read this thing to Avery, I find myself laughing like a teenaged hyena. I can't decide whether my mother actually has the world's purest mind or whether she just has considerably better self-control and decorum than I do. I could make good arguments for both. 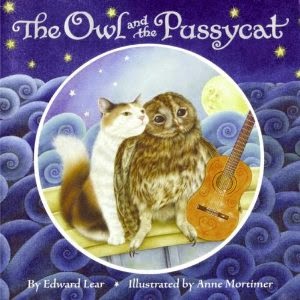 Contrary to what you might be thinking at this moment, however, this blog post is not actually about overt sexual references in children's literature. This blog post is about sporks.
As it turns out, Avery has never been a fan of spoons, nor of any food pureed enough to require the use of a spoon. She heavily favors chopped up fare that she can grasp with her fingers. While we've pretty much given up the ghost of trying to feed her in a dignified manner, occasionally, we do attempt to make use of what is tantamount to a baby spork (even though the company who made it insists on calling it a fork, which is preposterous because it clearly meets the definition of "spork")

A few weeks ago during one of my mom's regular "I need a baby fix" visits, she noticed the spork with which I was trying to feed Avery, and referred to it as a "runcible spoon." Now here's where we come back to The Owl and the Pussycat (see, it really did serve a purpose!). Among the other absurdities contained within the text, the final stanza contains the following reference:

They dined on mince and slices of quince,
Which they ate with a runcible spoon.

Although I don't remember well enough to verify this, apparently the illustration of the runcible spoon in the copy of The Owl and the Pussycat that I had growing up looked very much like a spork. Enough so that when my mom looked at that spork, she argued that the proper name for it was indeed a "runcible spoon" and not a spork... the implication, of course, being that the English language has been denigrated beyond repair when we use terms like "spork," woe and sadness.

This might never have gone anywhere, except for the fact that Mark was in earshot when Mom decided to supply the correct term for this particular food shoveling device. She argued "runcible spoon." He defended "spork."

And because Mark cannot let this kind of thing go, he had to go look it up.

As it were, the word "runcible," like the poem The Owl and the Pussycat, is nonsense. It means absolutely nothing. According to that great repository of internet knowledge, Wikipedia, Lear also referred to runcible geese, cats, walls, and hats, among other things. This blog post as just as runcible as anything else.

In fairness to my mom, Wikipedia does concede that "runcible spoon" is now often used as a synonym for "spork" and can also refer to a grapefruit spoon, but when it first entered the vernacular via Lear, it actually meant nothing. Lear's own depiction of a runcible spoon looks more like a ladle. Or a golf club.

A couple of mornings ago, Mark remembered that he stumbled upon this rare opportunity to trump my poor mom on something related to the English language, and decided to refer to any number of things as "runcible" during the drive into work... which brings me, finally, to the point of this blog post: "runcible" is a hilarious word.

Say it a few times. It. Is. Hilarious. I have this image in my head of a corpulent Englishman in tweed barking on about runcible this and runcible that as his face gets increasingly red and he has to wipe from his brow the sweat of indignation, spittle flying every which way. Maybe occasionally it goes a little Scottish and that "r" rolls just a bit. I don't know.

Anyway, that concludes this blog post about pussies and sporks. You're welcome.