Yesterday I bought my first regular bra since Avery was born. I bought this bra -- in my current, still-breastfeeding cup size -- because a few days ago I found myself standing in the fitting room of a tailor, trying to wrestle the neckline of an already perfectly modest wrap dress high enough that it wouldn't show my nursing bra. 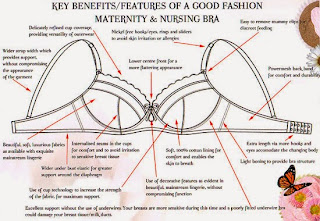 It took a few hours after leaving the tailor's shop for the absurdity of this episode to hit me. I had just paid someone to make the neckline of a dress less flattering in the name of hiding a giant bra that I only need to wear, at most, a few hours a day.

As I began to ponder this more deeply, I also began to question why on earth I'm still wearing a nursing bra to work. It's not like the baby is bellying up to my desk during the day for a quick pull from the tap.

In fairness, I've been wearing nursing bras to work for a good reason. Bras are expensive, and boobs that are hormonally beholden to produce milk tend to exist in a somewhat more...robust... state than normal. In my case, somewhere in the ballpark of 32E as opposed to my normal 32C. The last thing I wanted was to go shell out for an over-the-shoulder-boulder-holder for boobs that I'm not going to have for very much longer.

Before I go any further, let me take a step back and try to give you some perspective on my nursing bras. Sure, some women are able to go out and purchase cute, lacy, lovely bras that just so happen to pop open for on-demand feedings. Those women do not wear a 32E. Bras designed to accommodate the 32E udder are not sexy garments. There are approximately three different options available on the market, only one of which comes with an underwire (necessary) but no padding (honestly, people, if you are a 32E, you do not need padding). Meet the Anita bra: 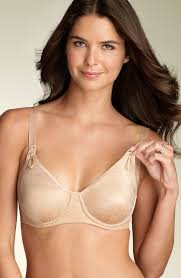 Far from making the newly minted mother feel sexy, this bra -- nylon, nude, shiny, with a pattern like vintage wallpaper and designed for maximal coverage -- is purpose-built to make you feel like the fertile octogenarian. While it might not look that bad on this lady, that has more to do with the fact that she's probably six feet tall and enjoying the aid of photoshop. As someone who stands 5'3" on a tall day, that middle section practically functions as a chin rest.

The primary redeeming quality of the Anita bra is that it is comfortable. A nice thick back strap and thick shoulder straps do indeed keep the boulders in place without all of the usual stabbing, digging, and chaffing. As someone who has spent a lifetime debating whether to remove shoes or bra first at the end of the day, it was a bit of a revelation.

But then I found myself standing in a tailor's shop about to pay to have a dress made uglier to accommodate the world's ugliest nursing bra. The madness had to stop.

So yesterday afternoon, I marched myself into the lingerie department at Nordstrom and emerged the owner of two very practical, real bras that accommodate my hormonally enhanced melons without requiring me to wear a turtleneck to cover up their support system. Sure, it wasn't the most practical expenditure, and as I sit here wearing one of them I'm having to resist the urge to tug at the back strap. But for the first time in almost a year, I don't feel like I'm going to be forced to choose between continuing to breastfeed for a little while longer, and wearing my pre-baby clothes. Button-down shirts are still pretty much a no-go, but everything else has just been wilting away in my closet unnecessarily.

Finally, as I was conducting a Google image search for the picture of the nude Anita nursing bra, I stumbled upon this image of the same bra in white. This may be the most hilarious /creepy nursing bra picture of all time. Just look at that kid's face. 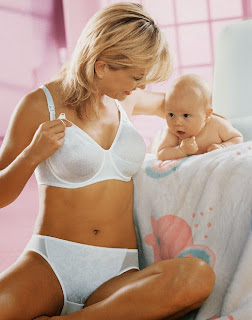