Mark, on Sunday afternoon: "Yeah, what's with this whole dad bod thing? I don't get it."

If you haven't heard the term "dad bod" yet, you are either living under a rock or you don't read the right parts of the internet. A couple of weeks ago, a Clemson University sophomore stumbled ass backwards into internet fame when she penned a piece on the "it" body type of the moment -- dad bod. Rather than attempt to provide a definition, I'm just going to quote hers:


"The dad bod is a nice balance between a beer gut and working out. The dad bod says, "I go to the gym occasionally, but I also drink heavily on the weekends and enjoy eating eight slices of pizza at a time." It's not an overweight guy, but it isn't one with washboard abs, either." 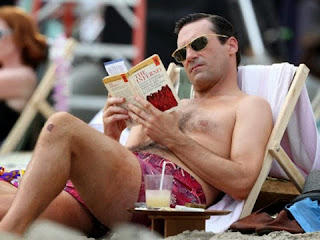 The Internet has been rocked by this revelation, vomiting up copious amounts of content analyzing the dad bod and the female interest in it. There are flow charts to help you answer the question, "Do You Have a Dad Bod?" There are articles admonishing men not to blame women for their dad bods. Jimmy Fallon weighed in with The Pros & Cons of Having a Dad Bod. TIME excoriated the notion of dad bod, calling it a "sexist atrocity."

While The Internet was having much ado about dad bod, women everywhere, myself included, looked at the article, yawned, thought, "yep, well, guess we have a name for it now," and moved on with their lives.

For me, dad bod was such a non-event that when it came up with Mark, I was shocked by his shock. He asked me to explain it to him.

Me: "I don't know. Women are attracted to guys who are stable, who have a variety of interests, who aren't afraid to have fun, but also know their limits and how to generally take care of themselves."

Mark: "But what does that have to do with dad bod?"

Me: "Dad bod is basically the body you have if you're that guy."

Mark: "But wouldn't you rather have a guy that has all of those qualities, and also has a six-pack?"

Me: "Umm.... that guy doesn't exist, at least not after the age of 22. That guy is a unicorn. Most women don't chase unicorns. Because they are mythical creatures."

Mark: "But say you could have that guy. Isn't that what you'd want? And doesn't that defeat the whole argument about girls actually finding dad bod attractive?"

Me: "You aren't understanding this. The guy with the six-pack and the ideal set of qualities for a life partner does. not. exist. Or at least he's extraordinarily rare. Sure, I think six pack abs are hot, but I don't want to deal with all the bullshit -- the food weighing and the 'leg days' and the Under Armor and the preening and the 64-calorie swill they call beer - that comes with it."

Mark: "Okay, but let's just say that you could have the guy with the six-pack but without all of those things."

Mark: "Okay, so then explain why all of those girls flock to [trainer at the gym who shall remain nameless'] class. Obviously, they are there because they think he's hot."

Me: "Sure, six-pack guy is fun to look at. But that doesn't mean I'm interested in being in a relationship with him."

Mark: "But that means you're attracted to that body type more than the dad bod."

Me: "Let me try to explain this to you differently. Let's take the game Fuck Marry Kill. I will totally fuck the guy with the six-pack abs , but I'm not going to marry him. I'm going to marry dad bod. And then kill whoever is leftover."

Mark thinks that the love of dad bod is settling. He hasn't said it outright, but you can tell that he does.

I call it higher-order prioritizing.

While I didn't find the concept of dad bod and attraction to it even slightly shocking, what has surprised me more is the level of freakout from blogging heads about how dad bod is emblematic of society's double-standards about male and female body types. This bit from the TIME article:


That’s the problem with the Dad Bod: It continues to reinforce inequality about what is acceptable for men and women. While the ladies have to go to Pilates and watch every single calorie, guys are free to let themselves get lazy, chow down on all the chips and guac they want, and still expect their prospective mates to be fit.

While I guess I understand how you could jump to this conclusion, I don't agree. Dad bod isn't - as the TIME article argues - represented by Homer Simpson or that disgusting lump from Family Guy. It's meant to denote your average, reasonably in-shape guy. I'd put John Hamm (aka Don Draper) in this category. He doesn't have a six-pack, but he also doesn't have a spare tire. Interest in the guy with "Don Draper"-bod isn't "reinforcing inequality about what is acceptable for men and women." It's not men dictating to women what they should find attractive. On the contrary, it's women refusing to chase the societal ideal of "the perfect male specimen" in favor of the all-around good guy.

Interestingly enough, I also disagree with the original article's author that the interest in dad bod has something to do with women not wanting to date guys who could be perceived as more attractive than them. Coming from a still-very-young woman -- a woman who's adolescence is still hauntingly close in her rearview mirror -- it makes more sense. Teenage years are filled with terrible insecurities for both sexes. When you're still recovering from that, there is a certain appeal to not dating Adonis.

But for me, and I think for a lot of women who have more distance from those teenage traumas, dad bod isn't about insecurity or being a doormat for a double standard. It's about finding a guy who has the right balance of life priorities. A guy who is going to look roughly the same at 50 as he did at 22 (if a little bit more gray at the temples). A guy who values the fluidity of moderation above the rigidity of perfection.

Because at the end of the day, I enjoy eating pasta. I like to have the occasional beer. I don't own a food scale. I don't ever want to own a food scale. I don't want to cook for a guy who eats only white meat chicken, egg whites, and avocado. I like to work out (perhaps more than your average bear), but I also really, truly appreciate being able to look at my husband and say "can we just be lazy today?" and have him say "yes!"

There's a lot more to life than having a six-pack. Or being married to someone who has one.