The Spidery Hellscape That Is My Lawn

There are many things that people will tell you about when you move to Seattle. The weather. The winter darkness. The frosty approach to social connection employed by many of its residents (aka "The Seattle Freeze.") Not one single person saw fit to inform me that Seattle is a spidery hellscape, especially between August and November.

According to the landscape maintenance people that we had to hire because I'm too afraid of the spiders to do the yard work myself, spiders are so beneficial for your garden! They keep the bugs away! They promote a healthy environment! As I see it, the loveliness of my garden is irrelevant if I have to live in perpetual terror each time I walk out my front door.

Lest you think I'm being dramatic, let me elaborate. In order to get to and from my car, I have taken to carrying my dog Cassie's ChuckIt (see below) as a cobweb and spider swatting device. If I fail to do this, it's almost inevitable that I will end up with a face full of sticky cobweb, jumping and batting about in case the spider that created it is now creepy-crawling through my hair. 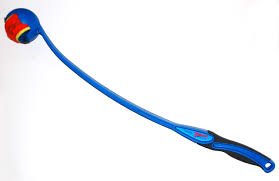 This exact thing happened to me a couple of days ago. Complacent as a result of the recent rains that had "washed the spiders out" (#nurseryrhymesspeaktruth) and loaded down with a diaper bag, a grocery bag, a car seat, and its infant occupant, I was fumbling for my keys instead of keeping a watchful eye out for webs. Bam, walked directly into a giant one that crossed the walkway.

I consider it a hallmark of my parenting ability that I used reasonable gentleness in placing the baby carrier on the ground and jumped four feet to the side before I began jumping and shivering about in paroxysms of arachnophobia in an attempt to remove both web and spider from my person. When I finally did knock the spider loose, I let forth a mighty scream that may or may not have cracked the neighbors windows, and then had to dance/prance/run/jump around the yard for another minute just to shake off the ickies.

Once I was sure I was spider-free, I immediately collected the assorted baby paraphenalia strewn about the yard, picked up the baby, went in the house, locked the door behind me, and pretty much immediately stripped down to throw all of my clothes in the wash. The baby sat placidly watching as though I'd lost my damn mind (she wasn't entirely wrong).

All this is to say that, rational or not, I am terrified of spiders. I don't care that the varieties we have in Seattle aren't poisonous. I don't give a shit how good they are for the garden. I don't give one right fuck that they are the reason we don't have mosquitoes. I will take the mosquitoes. Just get rid of the spiders.

Honestly, who wants to run into this shit? (I shivered just pulling these pictures, by the way).